The apron project is finished! But before we can begin, the first order of business is to apologize for the photograph quality. I will blame it all on the heat. The blurriness, the washed out color, and my “it’s-too-hot-to-care” hairdo compensated with red lipstick – all due to the summer that refuses to end.

Okay then, here we go.

The Maria Wrap Apron pattern I found on Etsy, by way of Pinterest. I ordered the downloadable pdf and was all set. It seemed straightforward enough, to make a reversible cross-back apron, right? Just make two and stitch them together. Well, not so fast. I knew I’d need help with this and Sharon, creator of Maven Patterns, was kind enough to create a tutorial for a reversible version.

My plan was to have black (or charcoal) linen on one side reversing to black/white dots on the other. This is what I ended up with – navy linen, and coral ground with blue birds. Not quite my original plan, but so much better!

Now, this might seem to be a very simple project, it’s just an apron, after all, but this struggling sewist had an issue or two. And there was nothing and nobody to blame but myself. Don’t you hate when that happens?

My first problem arose when I started the pockets, which as you can imagine, was pretty early in the project. Simple patch pockets. Anyone could make them. Well, I apparently wanted to do something squirrely with the folding, and they came out backwards. Fortunately I was practicing on an old dishcloth. In addition, I wanted the pockets to stand out a bit, but just using the reverse-side fabrics seemed too obvious a choice. My brilliant idea was to make a bias tape for top of each. Me? Make bias tape? Oh yes I did! But only for the navy side. The linen didn’t seem conducive for a narrow bias strip, so I bought a pack of navy bias tape ready-made for the birdy side. And it worked! And I managed to think clearly for a moment and get the pocket folding figured out. Here they are in all their glory…..

And the other little issue? Well, let’s not even talk about the fact that I had to whine to Sharon about how I had got the straps crossed into spiraling tubes, whatever shall I do? Sorry, Sharon. Thank goodness I was basting everything first. After calming myself down, I was able to persevere, and my fabulous new apron was nearing completion.

Some fun bits along the way:

My friend Rip is a multi-tasker – very useful in removing pins while stitching.

The pattern didn’t call for seam neatening, since all are enclosed, but it seems that the linen frays enough to need a little something. So, reason enough to purchase a set of pinking shears! Slowly building my sewing arsenal.

Another goody that came with my sewing machine is this nifty height compensating tool, perfect for going up and over all those thick seams on pockets and straps. 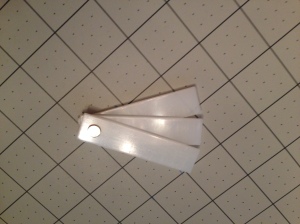 And here is how it ended up. The finished front and back of the navy side. And the finished front of the coral birdy side. The hanger (or photograph) doesn’t do it justice. The hem really isn’t jagged and uneven. Honest. 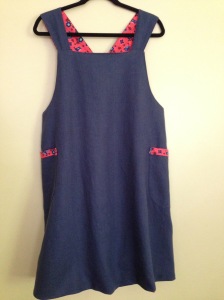 And here I am modeling my new creation. I’m happy! On to the next project… 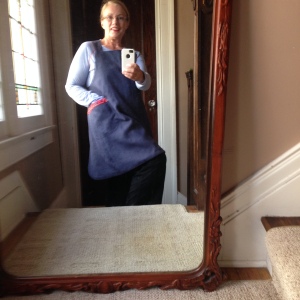 14 thoughts on “The Not-So-Humble, Dual-Personality Apron”